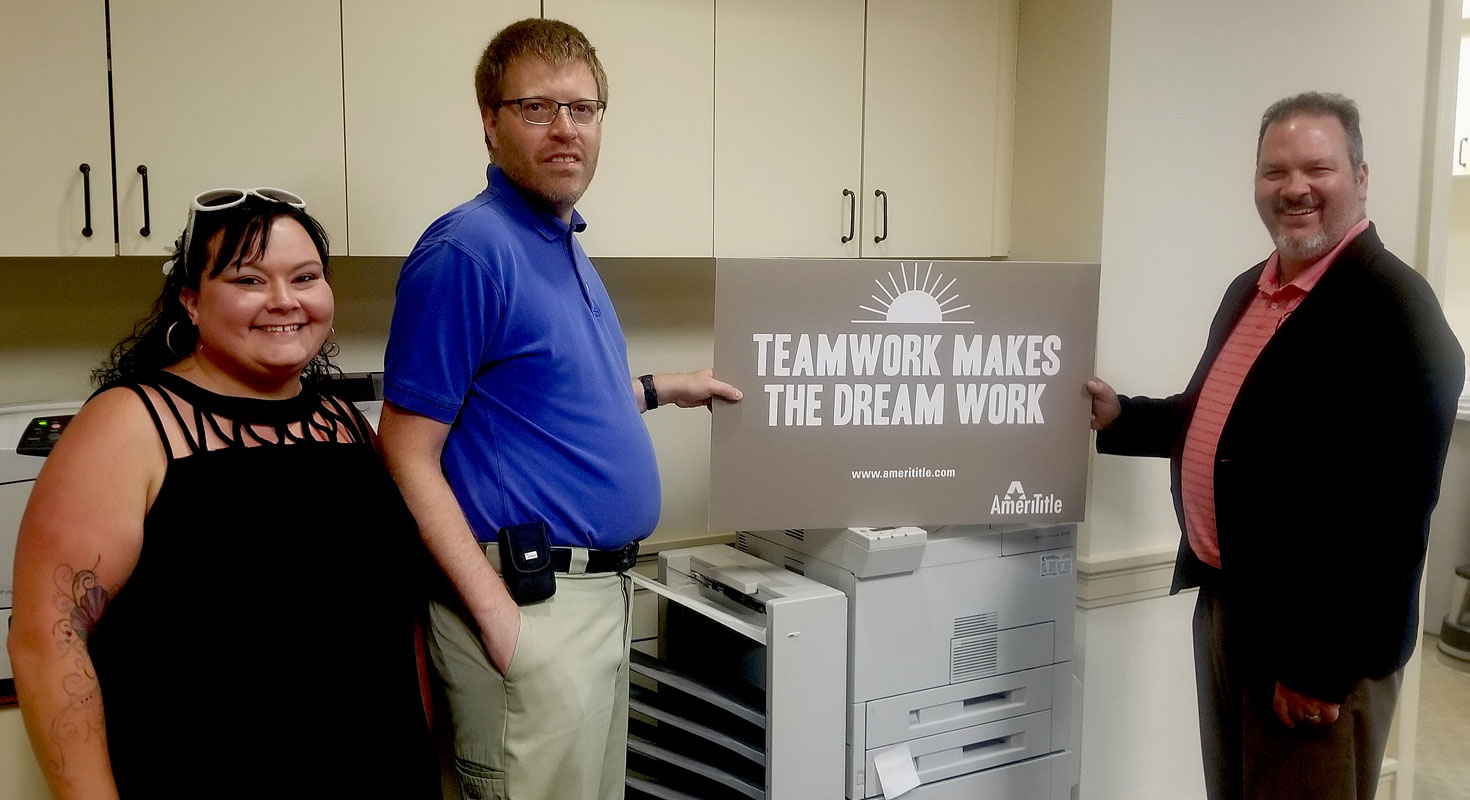 Kevin House had been volunteering at another local business. Sunrise Enterprises Employment Services Director Tami Seaton has known Kevin for many years and knew that his dream job was to work in an office doing filing and knew that he had the ability to be successful. She set up a meeting with Barry Robinson, General Manager of the local AmeriTitle Branch and Board Chair for Sunrise Enterprises and Umpqua Homes, Inc.

“My business is really complicated,” said Barry. Then he talked to his staff. They informed him that they were doing tasks that put them into overtime. They were tasks, they said, that they could offload.

Barry decided to give it a try! That was August, 2015. From the beginning, Kevin loved his job. The very first day he declared it, “great!”

He was hired to do filing, stuff envelopes, light janitorial, use the mail machine, secure confidential shredding, resupply paper in the copy machines and replenish snacks, water and coffee for co-workers and clients.

He doesn’t always have time to get everything done. He’s learned to prioritize his task list and if he does get the entire list finished, he is now comfortable taking the initiative to start projects that help the team. Kevin is definitely a part of the team.

Experiencing autism, Kevin hasn’t always found being a team member easy. He has learned that when a machine doesn’t work, or something isn’t how it’s supposed to be, to ask a co-worker. He is taking the responsibility in building natural supports. He has a great sense of humor and now participates in the office potlucks even bringing homemade food rather than just a bag of chips or cookies.

Kevin’s mother, Virginia DuBois was surprised that Kevin would even sit to do an interview, “I’m just thrilled,” she said, “I have seen so many changes in him; so much growth. He has friends that he goes on outings with and he is so much better at letting go of things he can’t control.”

Kevin gets to his job on his own. He sometimes rides the bus, walks or rides his bike. “He’s always here on time, and a joy to be around,” Barry said. “He’s just a phenomenal employee.”

“I am content here,” Kevin said. He likes his hours, the days that he works and the scope of his work. “I think I’ll retire from here.” He has a ways to go, as he’s only 39 years old.

Kim Shapro, Long Term Escrow Officer at AmeriTitle and a co-worker that works most closely with Kevin, said, “He does our filing and does things that would take us away from the work that we’re concentrating on, like filling the copier paper, taking away shredding, emptying trash and preparing escrow payments to be mailed. Most importantly, he doesn’t have to be told. He knows what to do. He also has a fun sense of humor that makes him easy to work with.”

“I do things for them and I’m an asset to the company,” Kevin said of his work. ‘I like working in an office environment, it’s quiet and I like peace and quiet. I like being a part of a team where I feel like I’m contributing something important.”

Kevin worked at Goodwill for many years doing housekeeping, which he wasn’t fond of and hanging and tagging clothes for purchase in the thrift store. He also worked for Ramcell Cellular as a file clerk.

Outside of work, Kevin enjoys traveling to National Parks, going on cruises, hiking, 10K’s, Special Olympics, Music on the Half Shell, the Douglas County Fair and the Festival of Lights.

On his growth, Kevin and his job coach Brandi Bellinger both agree, “He’s able to let go of issues that are out of his control,” Brandi said. ‘Stuff happens.’” When Kevin first started, he was a ‘little feisty’ he admits. “Being professional is important to Kevin. Reminding him of the professional environment he’s in and his position there helps him to refocus,” Brandi said. “Now he’s able to put things into perspective and let things go.”

View all of the Sunrise Community Employment success stories!